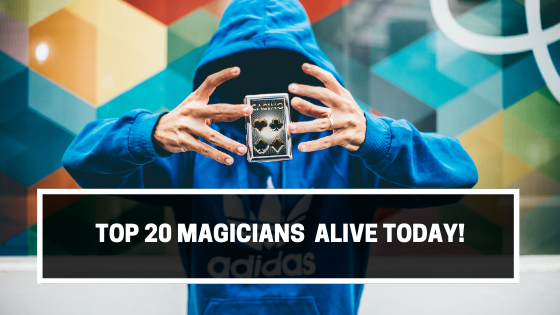 This is a subject close to my heart. There are so many talented magicians it’s hard to pick the very best because they are all so very different and have different skills. In this blog I’m going to share with you the very best magicians, the true greats, some you will never have heard of, others you will know very well.

To gather this information I ran a poll in the Magicians Advice Facebook Group to work out who fellow magicians thought were the best. The clear winner was Derren Brown, with over 50% of the votes. The other magicians are in order of the voting poll. Each magician has his/her own unique style in different fields, it’s a little unfair to categories them all together but to break them down into their own categories there would only be a handful in each group.

In order of the voting poll.

If you enjoy magic, then below is a little about the magicians and some performances . There are going to a few surprises along the way and some magicians you have never heard off.

Mentalist, psychological illusionist, painter and author. Derren’s TV debut was in 2000 called Mind control that changed the way most magicians/mentalist perform magic. The show was the start of a change in the public’s perception of magicians going from a silly kids show into a more refined and accepted form of entertainment. One of my favorite clips is the London Underground its pure drama. If you ever get the chance to go see one of his shows, then do so you won’t be disappointed.

Magicians and TV entertainers. They are most famous for their long running Las Vegas act, performing magic together for forty years and the last twenty years at Rio Hotel & Casino in Las Vegas. They are world class magicians and entertainers. For me one of the best pieces of magic I’ve seen performed has to be Tellers Misers dream

The richest magician to ever live rumored to be worth one billion dollars and the twentieth richest celebrity in the world. David is definitively one of the best magicians in the world. Most famous for making The Statue of Liberty disappear

If there ever was a magician magicians, this is the guy. David Williamson is an all rounder he performs stage, close up, parlor and sleight-of-hand artist. Watching David perform is a feast for the eyes. One of my favorite performances has to be Rocky Raccoon check it out below.

You’ve properly never heard of Bill Malone, but amongst magicians his know as one of the best card men around studying under Edward Marlo (the best card magician of all time) his sleight of hand is world class. My absolute favorite trick of his has to be Scarne’s Aces. Check it out below.

For me, David is my favorite magician of all time. He changed the landscape for magicians around the world with his first tv Street Magic aired on ABC 1997. I remember watching the clip below and thinking wow, that’s what I want to do. The reactions on the street with genuine people showed it was possible for others to perform in the same way. I’ve also included my second favorite trick of David’s with Margot Robbie. His the best.

A living legend – Juan Tamariz is a last look at the golden age of magic. His known by magicians as a maestro and a few magicians travel to his home in Madrid to spend time with him by invite only to study under the master.

Jerry is another magician underground magician. Hailing from a very accomplished magician touring his own show around the uk. If you get the chance, go see him.

Most of his stuff is copywrited.

Session 13s winner of America’s Got Talent if there ever was a master class on how to win AGT then this is it. His breath-taking performance below is one of the best I’ve ever seen on TV.

Another Vegas headline act working out of Caesar’s palace. Mac King is one of the best comedy magicians of all time. His unique fun show is for the entire family. If you’re ever in Vegas, it would be well worth checking out.

Max Maven paved the way for modern mentalism and mind reading. He was way ahead of the trend and is considered one of the best magicians of the 20th century.

Derek Delgardo is one of the industry creative thinkers his show Smash in and of itself was viewed as one of the best shows on broadway. But what really impressed me was his card work. Check out the clip below (its in spanish but worth watching for the technical skill)

Turned the magic world upside down with this when he won International Federation of Magic Societies (FISM) in 1998. He was stripped of the title and accused of using stooges. His card work is some of the unique and masterful I’ve ever seen.

Check out his Ted-Talk here

Ben Earl has to be one of the best card technicians alive today. He was one of the first to fool Penn & Teller on their TV show Fool use and one of the most masterful performances I’ve ever seen.

Following in the foot steps of Tamariz spanish magician Dani De Ortiz quickly gain notoriety within the magic community for his amazing card magic. We recorded a podcast episode a while ago to check it out click here.

This is some raw footage of Dani performing for other magicians

Dynamo AKA Steven Frayne will for ever been known as the guy who made street magic cool in the UK. He has had many hit TV shows but the one thing that most people talk about is when he walked on water. To check it out below (amazing)

Garret is a creative genius. He has worked with many top magicians on special projects and will be one of the magicians less known in the public domain. But well worth checking out.

It’s no surprise to find Fay amongst the top magicians. I witnessed this act first hand sit back and enjoy.

I was first introduced to Ben on Killer Magic BBC since then. He did an amazing performance on Britain’s Got Talent. I can’t wait to witness the wonder of Ben Hart in the future.

Steve Forte isn’t really a magician. His the very best card mechanic around. The reason is in this top twenty is because of the crossover from gambling world into the magic world. Never the less, he is amazing to witness with a deck of cards and well worth the watch.

That’s it for my top twenty magician. Looking back over older clips has really inspired me to become a better magician.  Its crazy how good you can become.